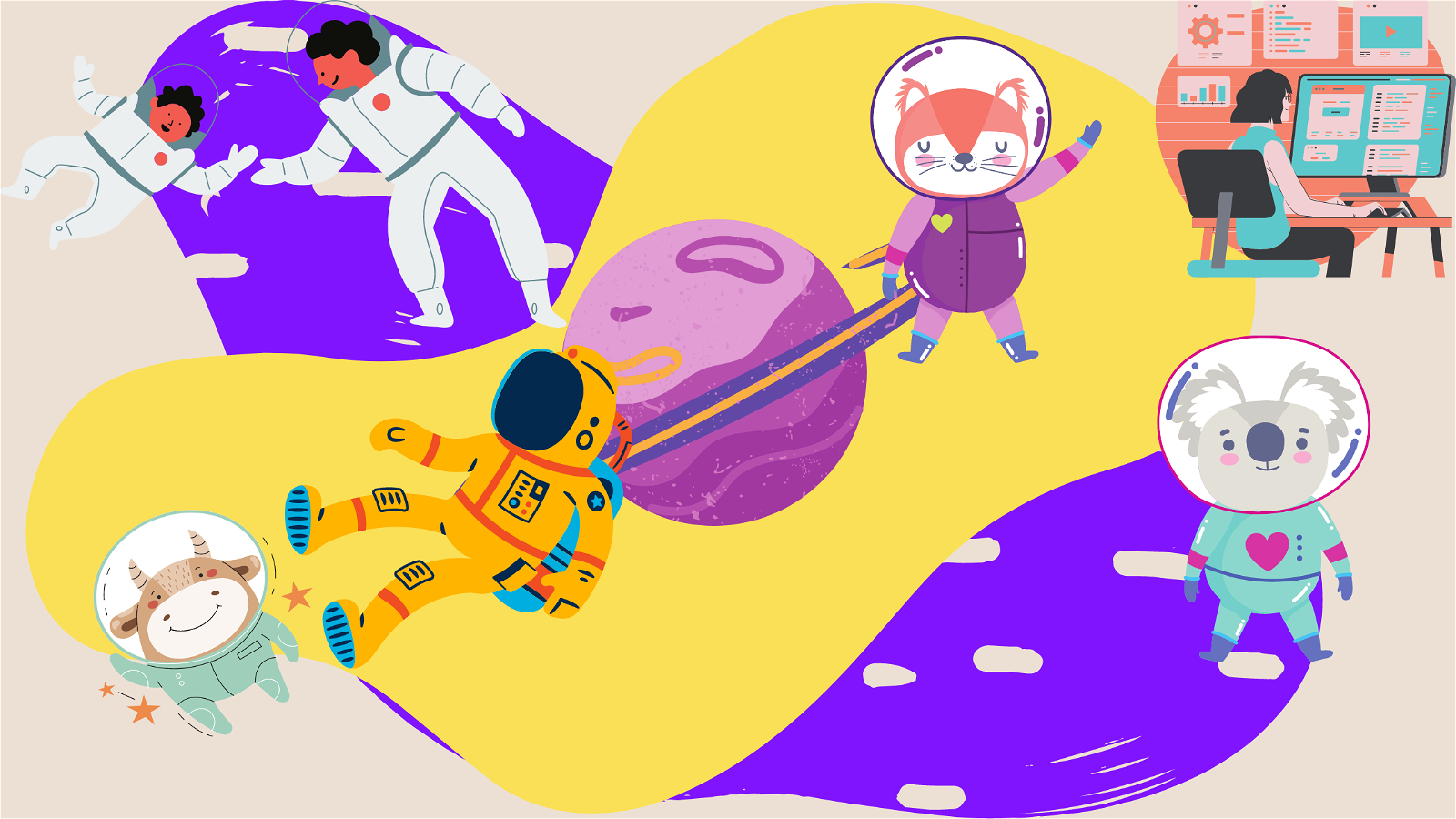 A general note, since I don't know where else to put this: if we look back at the history of technology over the last five hundred years, the two big themes are: media and machines. Books are media, steam engines are machines. The computer marries the two: it’s both medium and mechanism at once.

There’s a theoretical version of this insight, which looks at the physics of computation or the information theoretic foundations of physics. The interverse doesn’t concern itself with this theoretical story - its origins are in the concrete development of computing in the ‘real world’, which is one species of a bigger insight: science grasps the heavens but technology conquers the world. Which is why our story is about code in the wild.

The interverse is the story of how our lived reality is being modified by code - not only as engineering but also as design, as skill, as social process and as story.

Whether you read Vannevar Bush on the Memex or Douglas Engelbart on augmenting the human intellect or their current avatars in the Silicon Valley (or for that matter, the increasing number of people who use the term 'Anthropocene'), you'll see a common thread in their ideas: the human whose intellect is being augmented or in whose name climate change is being fought is an abstract quantity, an unchanging essence that couples to technology and saves/destroys the world. But the human is as much the product of the times as our gizmos. Imagining the Interverse is also imagining Humanity.

The printed text changed how our conception of ourselves. Books were one of the first mass produced modern commodities. Before we were all literate, manuscripts were read in the presence of others, often a teacher or a priest. In contrast, we read the printed word in solitude, hearing our voice again and again. How much did that experience influence the idea of an interior landscape?

The technology of print makes possible a private sphere that’s invisible to others and - ideally - protected from the prying eyes of the state. And the ability to make marks on paper and use those marks for tabulating and summarizing statistics makes possible the paraphernalia of being human in the nation state era: citizenship, population, policy etc.

While print humanity arose organically, we are now at a stage of development where the human interverse can (and should) be designed. With climate change breathing down our necks, we don't have the time to create the human interverse in fits and starts. Any attempt to design ourselves alongside technology is squarely within the territory of religion. Like Auroville:

Religious cults have it right: the rapture demands intentional communities that embrace transformation. In fact, there's a rapturous vision of 'designed humanity' that's already quite popular in certain tech circles: the Singularity, which aims to assimilate humans into machines. It even comes with an intentional community - the Singularity University. I am not exactly signing up for a cult, however advanced its robots. What's the alternative? Can we design a human interverse without moving to Southern California?

I don't know, but we better start digging.

According to some, we are in the third stage of the internet, Web3 as it's known. What's Web3? Here’s a teaser from a Hacker News discussion: “Web3 = decentralized identity, full data and connection graph ownership by user, reputation transfer, verification via zero knowledge proofs, support for VR/AR and 3D objects.”

When and how will these technical layers become real? What will it feel like us to use them as infrastructure?

These aren't questions for geeks and nerds alone: humanity is flailing during a planetary crisis and seeing as our age is called the Anthropocene, we desperately need a new way of being human on earth. As far as I can tell, the only technology we have to collaborate at planetary scale is the internet. The future of the internet is the future of humanity: screw it up as we have done with Web 2.0, surveillance capitalism and fake news and there won't be a future left.

The two have always been related, but most definitely so in the capitalist era: a factory is simultaneously an ordering of things and an ordering of people. But still, there’s a separation of the two tracks.  Not so with the Interverse, which merges the two at their core: I should be able to spin up a world that I inhabit with others, and in doing so, I am being Prometheus as well as Machiavelli. Let me put it another way: if you are manipulating an avatar or bargaining with one - say, Agent Smith in the Matrix - are you Promethean or Machiavellian?

The merger of the two intelligences has already produced new identities and will continue to do so at an accelerating rate. Indeed, one might say that the ‘production of the human’ is the task that stretches both our Promethean and our Machiavellian skills to the max.

Chances are you have asked yourself “who am I?” Maybe after a really late night with your college buddies. Or because you are in a religious tradition that routinely makes you ask that question. Like everything else, there’s now an app (actually, many apps) for that. Google even has a program called ‘search inside yourself.’

I’ll be honest with you: it’s a pseudo-question, for it’s almost never asked with the intention of knowing the truth, and when you ask it with that level of seriousness, you realize that the very act of asking that question biases you towards a certain kind of answer, like there’s a true self that’s waiting to be found. Or, in a deflationary move, one leaps toward the Buddhist answer: that I am no one. Not very interesting, if you ask me.

Instead, let’s look at how the ‘I’ plays out in the world, the I of the beholder, so to speak. We inhabit different Is in different situations without ever learning how to do so. And the distinctions we draw are quite subtle. How you bargain with a shopkeeper in the local bazaar is different from how you bargain with your boss for a raise.

The internet has made the play of identity much more complicated. We are playing ourselves all the time: sometimes by being anonymous, sometimes being vocal and sometimes being a troll. If you’re an ‘influencer’ being yourself is a full time job - one that didn’t exist before. We have always had actors and performers, but performing oneself - and that too at internet scale - is a really new thing. And figuring out who you are is not just your job, it’s also the job of some of the wealthiest corporations on the planet, who are constantly probing and shaping your identity as a consumer, as a voter, as a mate.

Let’s come at identity from a technical direction now. The identities of people weren’t as important in the early internet as that of devices. I might have had an email ID and so might you, but how do I make sure that the email I sent from my ID to yours actually reaches you. There has to be a way to route the package of bits from my machine to yours and that, in turn, needs a way for my machine and your machine to have identies of their own.

But as the internet grew and we started possessing more and more devices and started performing more and more of our lives on those devices: moving, dating, buying and so on, it became natural to ask whether the same person is doing all of those activities and how those behaviors might be correlated with each other. How do I prompt you to buy flowers before your first date? There’s obvious commercial value in knowing two users are the same person or that they are related to each other or friends with each other.

Nevertheless, these commercially mined identities are mostly tacit and in privacy conscious countries, these identities aren’t formally tied to you and can be disassociated upon request. You might think that’s a good thing: why should Facebook - sorry, Meta - know that you are you. Isn’t it better that you remain formally anonymous even if there’s plenty of data to tie your online behaviors to you as an individual?

Feels like common sense, but I will argue that it’s a terrible solution.

The thing is that neither Meta nor Google cares about you as you. If you were a Zombie with a bank account and they could get you to click on ads for succulent flesh, they would be more than happy to do so. Your being a person is irrelevant to their business model.

The surveillance state doesn’t care either. It just wants to fix your behavior and make sure you don’t flout the norms of authority and power. Your personhood - that you are you - doesn’t matter to the state. At best you’re are a citizen with some abstract rights, but you aren’t a person to the state- the state as currently conceived doesn’t have the concept of person in its formal structure.

You might counter - perhaps justifiably - that you don’t want to be seen as a person either by Google or Jinping. You want to be invisible to them. I don’t think that’s possible: you’re already being made visible through your data trails and the technologies of surveillance. What’s actually missing is a formal system that places and values you as more than your data and more than your voting patterns. We absolutely need technologies and systems that recognize you as you. BTW, we have always been able to do that with our intimates, friends and family but until now, the best we have been able to achieve with strangers is some form of abstraction like ‘citizenship’ mediated by the Nation State. But it’s absolutely crucial - if the Interverse is not to become a faceless matrix - that we create the institutional capacity to see people as people.

In other words, we need to formalize identity in two distinct but related ways:

1.   Formal in the sense of formal logic, i.e., precise ways to encode identity and reason about it, allowing both continuity and differentiation.

2.   Formal as formal recognition in the way that nation states recognize each other and inscribe identity into the fabric of politics.